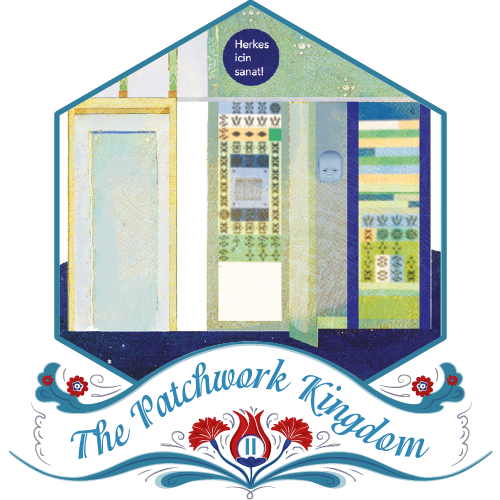 Georginas eyes kept flicking between the miniature painting and the colorful pattern but she couldn’t find the strange baby-face. Suddenly a group of school kids surrounded her. A man with a green baseball cap greeted them and began speaking about Brunnenpassage. “The entrance of Brunnenpassage includes an artwork by Stefan Wirnsperger. The artist was inspired by the patterns of kilim carpets. Kilims are used on walls or as prayer rugs to embellish interiors all over the world. They are especially popular in the Balkans and in Turkey. These are also the regions where the majority of the people from Ottakring come from.” The artist had imagined Austria as a patch work carpet. Georgina had to think about the beautiful Kelim that she bought from an Ottoman merchant after the 2nd Siege. At the turn of the 18th/19th century something wonderful happened and Georgina loved to dream herself back to this time. Coffee shops opened, oriental carpets and textiles became fashionable, people danced and dressed alla turca and famous Austrian composers like Mozart and Beethoven wrote Turkish marches.

Suddenly she realised that the tiny baby had stared at her all the time. Through a coat of paint it overlooked the people coming and going. Was it there to protect her and the others? Georgina wasn’t sure, but she knew that if a place like this, where so many different people gathered, was attacked by monsters it would be disastrous. Monsters don’t have an own body. Senselessness make up their menace. They invade the brains of human beings, feeding themselves on fear and a large portion of loneliness and jealousy.

From Brunnenpassage loud music now leaked. A door opened and an energetic group dispersed themselves onto Yppenplatz. It made Georgina happy. Ottakring reminded her of what she so much liked about Vienna. That Vienna wasn’t only one city but that it was built of many different cities. “It’s really unfortunate that people forget things so easily,” Georgina thought. The monsters made people say things like; ‘Austria belongs to Austrians’ or; ‘Go home!’. In her 5 centuries Georgina had gotten to know so many different Austrias. Austria in all colors, sizes and moods. How come that people suddenly feared each other again, where did this senselessness come from?