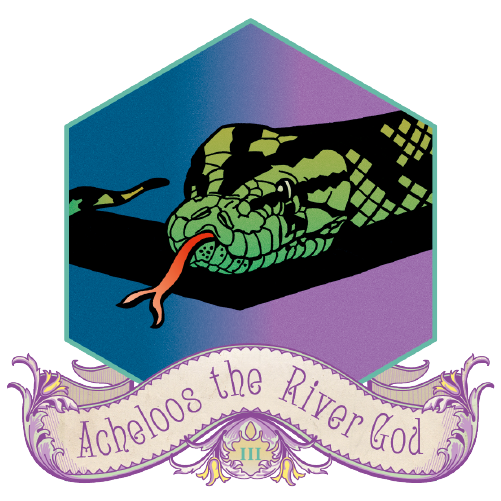 That’s why he was lying at her feet. She was his favourite daughter. He had chosen the shape he felt most natural in: a snake. River Gods could change form whenever they felt like it. Against Hercules, he had fought in the form of a bull, but it hadn’t helped him much. Hercules broke off one of his horns and used it against him. He felt more comfortable as a snake. She was like the water herself, flowing and winding.

Those who listened to the faint murmuring of, or even drank from Castalia’s fountain, were granted poetic inspiration by her. This wasn’t, as it was often thought, one of Acheloos’ gifts to his daughters, no. It was all her own power. They had engraved her throne with the following letters, “I am Castalia, daughter of Acheloos” and “From sleep came dreams, and from dreams came knowledge”. Knowledge she promised all those, who sat listening close to the fountain, at the center of the university. Knowledge and wisdom, to make the right decisions.

As she had taken her seat on her throne in 1910, she thought a lot about the people of this country and the decisions they were facing. Only recently had the right to vote been granted to all men, regardless of their financial  background. Before, this right had been a privilege of the wealthy and academics. Women, however, were still exempt from political participation, no matter their standing.

Even though some had owned this right before 1907 at least to some extent. If they had been wealthy enough and paid their taxes, they could take part in some elections. It hadn’t been made easy for them though, as only men were allowed to enter polling stations and women had to give their vote to a male representative. Only 1918, with the foundation of the republic, came the general right to vote for women too. And even then, on one condition. The Christian Social Party only agreed to pass the bill, if women would be given different colour envelopes than men. This measure would ensure they could ‘monitor’ women’s voting habits and it was upheld until the year 1930. After 1930 same coloured envelopes were used for all voters. With the exception of the city of Vienna. Vienna was different. Vienna re-introduced this law in 1954 and only abandoned the rule in 1996.

The right to vote for everyone, wasn’t the only thing the muse didn’t like, however. She didn’t appreciate the fact that the University of Vienna didn’t honour any female academics. All the busts honouring important people in the university’s Arkadenhof, were male. Consequently Castalia decided to stand up, raise her arm into the air and protest against the university! The muse was fed up! Again, Acheloos was very proud of his daughter. He knew she didn’t need his appreciation, and still he liked watching her defend her rights. Until the year 2016, the only women in the Arkadenhof were Castalia and Marie von Ebner-Eschenbach. And even Marie only had only been given a plaque, not a bust.

That was the reason why the violet-grey mist first appeared at the university. Nonetheless, as other important women in academia were honoured in the year 2016, the fog retreated. Castalia kept standing, just in case. There were still many things to protest against. But she felt, an important first step had been taken. Her father Acheloos however, had been enveloped in a fog so thick, neither the sound of the fountain, nor his daughter’s screams could reach him. He was struck by the Viennese grumpiness and sent it out into the library and the books, the lecture theatres and their professors and students.

Until, one day, a figure was standing in front of him. In the shadow of his daughter, at the foot of the fountain. It was hard to tell through all the mist, but the figure was definitely a monster hunter! He immediately felt the change in the air and how the grumpiness was lifted from his soul.