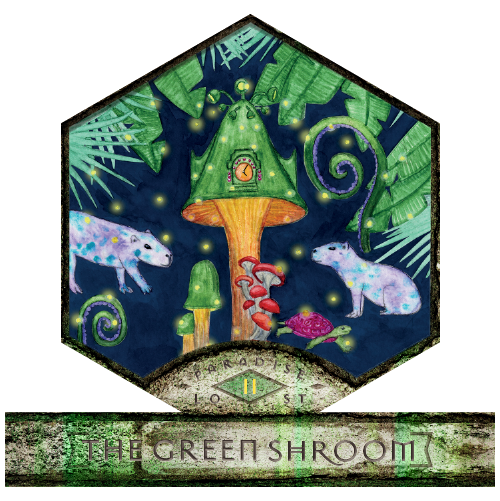 From the shock of her first monster encounter after 100 years, Georgina made sure to check on all the amulets that were supposed to protect the city from the monsters. Her first, and one of the most important, was located right around the corner in Stadtpark. It had taken the form of a small weather tower and was inconspicuous to the normal eye. But G knew. She remembered placing the enchantment in 1913 mumbling the words and sealing the spell. One of the three clocks had stopped because of it. The Viennese one, of course. A good sign, she thought. Now back at the same spot she immediately knew what was wrong! The weather tower was gone! Instead there towered a huge green mushroom over her, polluting the air with its spores. It wore a green hat with a feather, that swayed in the wind, undecided which way it should look. Georgina couldn’t believe her eyes. She saw how the mushroom’s spores spread grumpiness all over the place. What could she do? She decided to speak an enchantment, slowly walking around the mushroom, making sure to touch every engraving, every name of a city, to remind the tower, that it was, indeed, a weather tower, not an poisonous mushroom.

Slowly the tower changed its form. It became clear, that It had not been cared for in the last 100 years since it had been rebuilt in 1913. It seemed it had taken a similar fate as its first form, which was built in 1883, which had become wretched and desolate and consequently replaced by a new tower. The beauty of the weather tower from then had gone. In this state Georgina’s enchantment couldn’t have worked. If the Viennese didn’t care for their city, how should the city protect them from grumpy monsters? No wonder the Viennese were so grumpy all the time. This wretched weather tower produced enough Grant for everyone! G was furious! She mumbled another quick spell, making sure to say out loud each clock and its time, and then set out to check on her paradise garden, which was just around the corner.