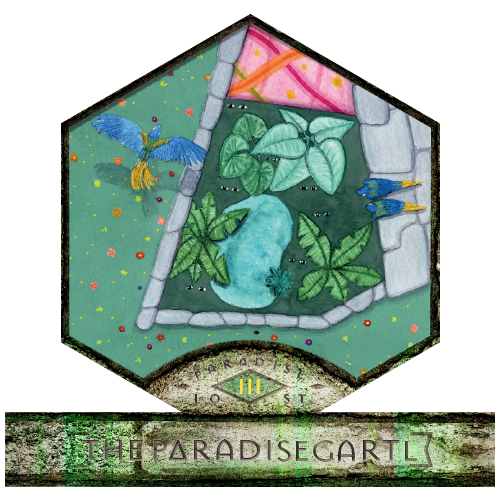 At first Georgina couldn’t find her loved paradise garden. A huge rusty tree was towering over it. It smelled of Grant and bureaucracy. Red rusty sap leaked out and dripped into the clearing in the concrete. Only then did Georgina find the remnants of her, once beautiful, paradise garden. They were covered in something small, greyish, moving rapidly. The garden used to be G’s place of power. A place to recharge, to forget the worries of life. A personal space, but accessible to everyone. Now it was encased in ugly slab. She could see tiny grey monsters eat at it. They looked like gnomes, but not the typical lovely garden folk you could meet on people’s lawns. These had ash-white skin and red eyes. They were wearing grey bowler hats and carrying black briefcases. The rusty liquid from the tree seemed to help their appetite. Some of them even broke off bits of paradise and put them in their suitcases to take home. With each bite, a tiny bit of Georgina’s paradise disappeared. G was angry. How could they do this to such a lovely place? Who was responsible for this? Irritated she yelled down, “Oi! Leave my paradise alone!”. The gnomes stopped immediately and looked up. They had been caught. This place was no longer a safe feeding ground for them. Other people might claim back the garden too. They hurried away, leaving a considerable mess behind. What had looked like a black, grey hole before, now revealed the remnants of a garden. It had become a dump. The trees had been cut down, and concrete was everywhere. Georgina was sad. What could she do, to protect her place of power in the future? She decided to take a mental picture and, at home, draw what her paradise garden should look like in the future. This should be enough protection for it.