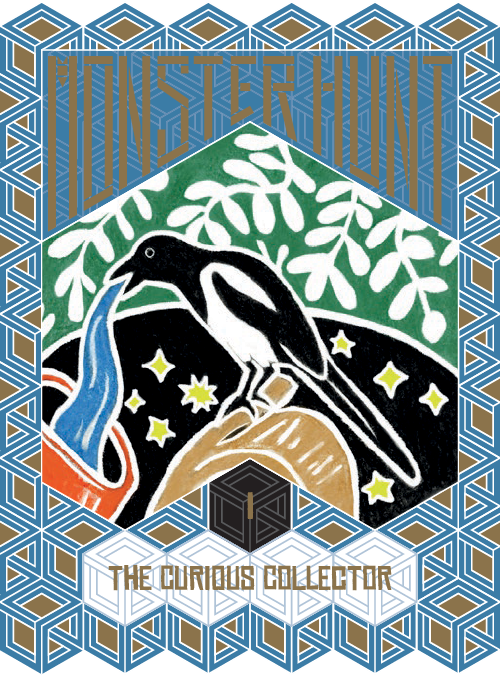 Monster Hunters and magpies, like me have been drawn to each other for ages. We valued each other’s curiosity and sharp minds. The Alserbach here attracted us both. The Monster Hunter Guild powered their labs and workshops with the flow of the river. And like us they were fascinated by the enchanted aura in this valley. But their work stayed hidden from most eyes, while we magpies moved about freely and proudly. They say the name Alsergrund comes from the old Elstergrund, meaning magpie grounds. That is how common of a sight we were around here. And so, the whole area blossomed and thrived, and I became a symbol for that – a good omen, a bringer of luck. I have to say I quite enjoyed this admiration.

But a sharp mind can be a dangerous tool in the wrong hands. Soon some humans began to abuse the river and used science to further their own interests. Wisdom and openness were displaced by greed and jealousy. The values of the Guild were slowly forgotten. I had to go into hiding to avoid capture or being chased away. To this day I wonder if the friends I had to leave behind have made it as well. When the river was covered up, I was close to giving up. With its disappearance my last source of hope seemed to run dry.

Somehow, maybe just out of spite, I forced myself to keep going. I simply couldn’t let this injustice stand. Now the river runs unseen and I too work from the shadows. As my personal act of rebellion, I bring a little bit of the river’s water to the surface, so it can flow like it should: free for all to enjoy, who take the time to look.

I don’t show myself to everyone to protect this small wellspring at least until it is ready to grow stronger again. But with your help, Monster Hunter, this moment my come sooner than I anticipated. Can you hear the rushing sound below us grow louder? Every small deed counts. It will make a difference if there are enough of them.

I have built my nest close to here. It’s a safe place to gather your strength and plan out your next steps. Look on your map!