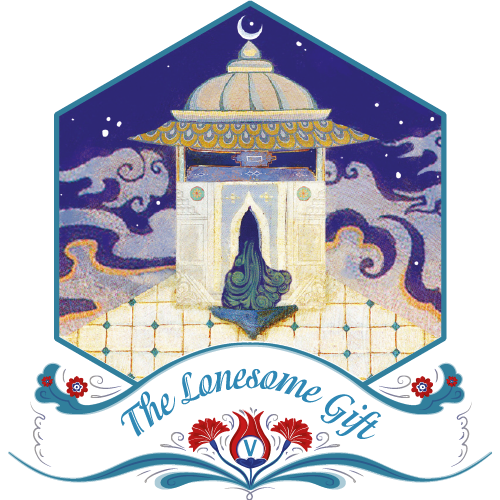 After the encounter with the Eight Watchers Georgina senses were sharpened. As she entered the park, she noticed a black crow greeting her from above. On a park bench a woman in a yellow woolen hat slept; next to her feet the crow began exploring a leaking tetra-pack. On winding roads Georgina passed an empty playground fortress. A mother was trying to make her kid stop climbing a horse, the owner, a Kozak, sitting on his stone smoking couldn’t care less.

When she reached the other end of the park a girl with headphones stared at her smart phone. Everyone seemed too busy to care about the beautiful well in the middle. While letting the water run over her hands Georgina noticed the Golden inscription We created all life from water.

Hayriye had asked her whether she knew what a dervish was. „Embarrassing!”, Georgina thought, “I’m already so old…” Georgina knew what a witch was and how to make wishes but what a Derwisch was she didn’t know. “A dervish is a voluntary immigrant,” Hayriye said, “a wanderer that has chosen to live with little means. Yunus Emre the Turkish poet who has given the name to the well was a dervish. He was one of the first of his culture to sing and write poems in Turkish.”

Next to Georgina the girl with the headphones stood humming to herself. At first Georgina thought it was a lovesong, then she realised that it was one of Yunus Emres’ poems. “A heart makes a good home for the friend – I came here to build true hearts“. The girl moved the rounded stairs down, made a photo from the well and sent it off with a loud whizz. Maybe she wasn’t alone, Georgina thought. Maybe she was just hanging out with someone that wasn’t here in the same place. Who was the receiver of the photo? Georgina got curious how many friends the girl had on facebook, in Vienna or anywhere and especially what the word friend meant for her. Georgina had one last wonder card in her hands now.