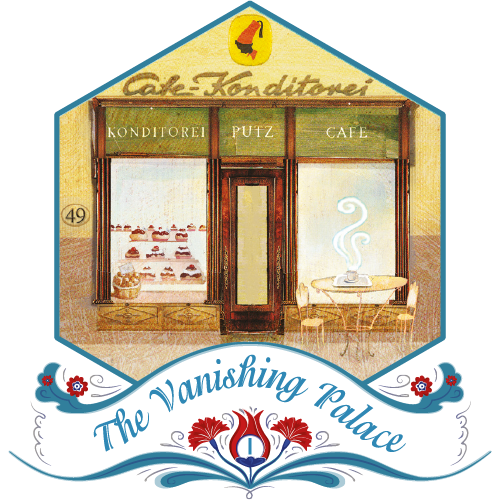 Georgina found herself in front of the impressive wooden frame shop entry. Where had café Putz gone? Were the monsters the reason for the café to close or was this simply the ravages of time? As she looked up at the sign above door 49, the young boy with fez also vanished. Georgina looked around. What would Vienna have been like without coffee?
Dear unknown friend, you probably ask yourself what’s so special about coffee? So did Georgina at first – she actually prefers coke. Until Hayriye served her the sweetest coffee she had ever tasted in her long life and began to narrate: “Bir kahvenin kırk yıl hatırı vardır atasözünün anlamı; this means something like: One cup of coffee – a 40 year lasting friendship.” And as Hayriye told about the connecting power of coffee, images of how the black liquid danced from one hand to the other unraveled in Georginas head. In front of a red fruit bush she saw a shepard from the Kingdom of Kaffa. In the harbour of Mocha, she saw a merchant stealing a sack of beans and trading it. And she saw a delegate of the Ottoman Empire serving a Viennese aristocrat his first cup of coffee. The caffeine in Georgina’s veins began kicking in. “But don’t stir,” Hayriye said, “a good turkish coffee is very thick at the bottom.” Georgina laughed. “Hayriye, you know, only now, nearly 350 years

later, I begin to understand why the queues were so long when the first coffee shop opened here in Vienna.”
“Americano, Kleiner Brauner, flat white, Wiener Melange, Türk kahvesi or Galão… Monsters hate coffee because coffee knows how to belong everywhere and in anyone’s hand,” Hayriye said. “The best way to activate its’ wonder is to brew it with care and serve it to a stranger. Simply try it sometime!”