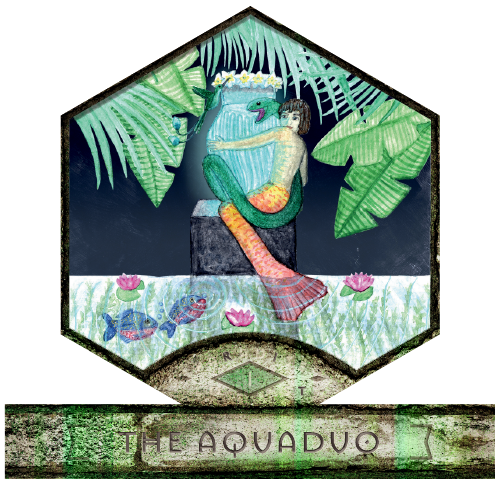 Georgina woke up. Only slowly did she put things together. Someone must have found her letter and explored the city, found the monsters and… released them from their Grant! “This is incredible!”, she exclaimed! The first six monsters were calmed!

But something didn’t feel right. G. could sense it! The Grant (grumpiness) hadn’t fully subsided… Were there more monsters in the city? But why? The 1918 mystery had been solved! Georgina immediately knew what to do: check out the Stadtpark! If this place was calm, everything should be alright!

She made her way to the large park at the center of Vienna, making sure she entered through the lush gardens at the southwestern entrance. These had been one of her favourite places in this city. The grand canopy at the entrance, with thick greens, and a huge river flowing underneath, as if you entered a jungle in the Amazon rainforest. She remembered it well.

Lo and behold, when she got there, the scene looked totally different. The lush canopy had made way to all the stoneworks. The huge river was a mere trickle of a creek. And the four twins (octuplets actually) had absolutely no shrubbery to hide in! These were mystical aquatic creatures that thrived in the wet bushes around water. The direct sunlight had made them pale and unable to move. The sun’s harsh rays had petrified them. Georgina remembered when the snake and merkids had been frolicking in the water and played hide and seek in the bushes. Now they were mere statues of themselves, unable to move and turned to stone, by the sun. And a grey mist emanated from them. Clear as day Georgina understood: the octuplets were polluting the Stadtpark with Grant (grumpiness). Thank G, she knew exactly what to do! She found some leaves and a branch and covered the snakes and merkids with them, shading them from the sun. “A drop of water might also help!”, she thought, and sprinkled some from her water bottle onto the statues. And soon enough, the Grant subsided and the merkids came to life and laughed at the plants around them. The monsters had been calmed.